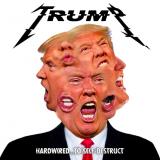 There are additional Metallica song titles with a letter removed available.

There are additional Metallica song titles with a letter added available.

There are additional Metallica song titles with a letter changed available.

There are additional Metallica Combined Groups that haven't been done yet available.

"Seek & Destroy"
A Program director for a radio station made a completley unofficial list of songs that may offend/remind people of 9/11. However this list was leeked out as being an official company policy, which was not true.
Submitted by: Optimus Lime
"Turn The Page"
They banned this video because it showed a stripper stripping.
Submitted by: Giamevil

"3 names for an EP "
On August 21, 1987 Metallica released an EP of covers of 70s and 80s glam, heavy metal and punk songs 'The $5.98 E.P. : Garage Days Revisited' on LP and cassette. The CD version was titled, 'The $9.98 CD: Garage Days Revisited'. All these versions had a sticker commanding, 'DO NOT PAY MORE!'. These same songs were released on the 1998 'Garage Inc.' compilation which had some really awful crap on it. The EP was re-released in 2018 by itself as 'The $5.99 E.P. : Garage Days Re-Revisited'.
Submitted by: Orion
"Public Service Video"
Metallica has made a public service video as part of a law enforcement publicity blitz to try to catch a man wanted in the death of a Virginia Tech student who disappeared after one of the heavy metal band's concerts.
Submitted by: Robert D. Arndt Jr.
"Napster Controversy"
In 2000 Metallica Filed a lawsut against Napster, an internet file sharing service and banned many users from the site for downloading their music for free. This caused a major backlash with fans that labeled them "corporate sellouts"
Submitted by: Thaddeus Gammelthorpe
"Heavy drinking"
There heavy drinking in the 80's lead them to the nickname, Alchollica
Submitted by: Glenn Rousseau

Blacksmith
Uhhhh..... must i explain?
Submitted by: You dont wanna know.