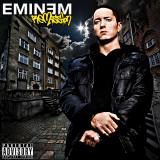 There are additional Eminem song titles with a letter removed available.

There are additional Eminem song titles with a letter added available.

There are additional Eminem song titles with a letter changed available.

There are additional Eminem Combined Groups that haven't been done yet available.

"Just Lose It"
Better Lyrics:
Come here, everyone, it's storytime

Guess who's back with a brand new rap?

Teachers got a brand new bag of work

What else could I possibly do to make noise?

I done touched on everything but teenage girls

And that's not a stab at Jake Paul

Guess who's back with a brand new rap?

Papa's got a brand new bag of toys

What else could I possibly do to make noise?

I done touched on everything but little boys

And that's not a stab at Michael

"M-in-M
Like the singular of a certain small round candy.
Submitted by: David Sari

"Everything"
In 2000, the University of Sheffield banned all Eminem records from student radio due to concern about sexism and homophobia in his lyrics. The ban even extended to student newspapers, with reviewers banned from covering Eminem records and gigs.
Submitted by: Horatio
"Stan"
On VEVO, the lines "shut up b****" and "screaming in the trunk" are both removed from the video and blanked out. In the clean version (on itunes) only "in the trunk" is censored
Submitted by: Randy R
"Most songs"
Banned and censored by the USA and himself for anti-Bush lyrics, making fun of homosexuals, and referring to the Columbine school shootings.
Submitted by: dxman

OF: "On Fire"
Submitted by: Candy Welty

"My Name Is"
Eminem's own mother filed a lawsuit against her son over the lyric "99% of my life I was lied to I found out my mom does more dope than I do." In her lawsuit Mrs Mathers claims that she never did do drugs of anykind around her son. But soon she repeatedly dropped and reinstated the lawsuit.
Submitted by: Celeste

"Altercation Of A Firearm"
Eminem was arrested on June 3, 2000 during an altercation at a car audio store in Royal Oak, Michigan, with Douglas Dail, where he pulled out an unloaded gun and kept it pointed at the ground.
Submitted by: Glenn Rousseau
"Assault"
In 2000 he was charged with assault and having a concealed weapon. One month later he was charged again for having a concealed weapon.
Submitted by: Travis
"Assault and Posession Of A Fire Arm"
Stemming from an incident in which Eminem caught his then wife Kim with another man. Eminem assaulted and then threatened the other man. He was sentenced to phrobation.
Submitted by: Celeste

"Sleeping Medication Addiction"
I won't mention other drugs and depression because those were almost granted given his troubled upbringing, but what was interesting was that according to hte late DJ Proof, in 2005 after he sobered up from drug and alcohol dependence, he became addicted to sleeping pills Zolpidem, which caused him to cancel the European leg of "Anger Management Tour".
Submitted by: Rocky Mak

"Hailies Song"
In the rap part, the line "So glad her mom didn't wanter" is censored. Some misthought it as "abort her". If you reverse the part you clearly hear want her.
Submitted by: RRandom

"Bad childhood"
He's trademarked with having a bad childhood by having to move often.
Submitted by: mads.
"Drug Use"
In 1999, he kept referring to drugs, like in Role Model he says "Smoke w**d, take pills" and in Kill You in 2000 he says "I invented violence you venomous volatile b****es, Vain Vicodin"
Submitted by: RRandom
"Sara Palin"
In a music video of his, Eminem not only mentioned Sarah Palin, but also had a very close look-a-like to her in the same video. I think it was for "Rock Star Love"
Submitted by: SaintVenn
"His chainsaw and hockey mask"
Several times at concert, he went onto stage wearing a hockey mask (a la Jason Voorhees) and running a live chainsaw (a la Leatherface)
Submitted by: Ra'akone

M&Ms
Because Eminem, M&Ms, gettit? Nobody did this,wow!
Submitted by: Braeden