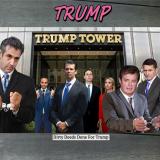 Known informally as: After Christ Demons Come. Submitted by: PeartNeal

"Highway To Health" by Jake A Ralphing (Luke Brattoni)
a parody of "Highway To Hell" by AC/DC
Done under my pseudonym Nib Oswald with my friend Nick Foran on guitar and vocals.
YouTube: (YouTube)
(Leave a Comment)
"D & D" by AmIRight All Stars (featuring Matthias)
a parody of "T.N.T." by AC/DC
Written by Matthias, recorded by Below Average Dave this is one of Matty's most heavy hit songs among his collection of nearly 500 written works.
soundclick.com: (mp3)
(Leave a Comment)
"(Straight to) DVD" by McKludge
a parody of "TNT" by AC-DC
Here's another recording of my parodies. We've all seen those movies at the store, the ones we never saw an ad for, the ones that look pretty bad ...
SoundClick: (MP3)
(Leave a Comment)

There are additional AC/DC Combined Groups that haven't been done yet available.

"Have a Drink on Me"
Better Lyrics:
Pop that tastes like candy

With a glass I'm pretty handy

On ginger ale with some lime

I got involved in a fight

My glass is getting shorter

On ice and soda water

So come on have a good time

And get jacked up outta your mind

(Note: This is the "teetotalers version" of "Have a Drink on Me". The rest of the lyrics remain the same. "Jacked up" means to be under the influence of caffeine, which lots of soft drinks have.)
Original Lyrics:
Whiskey gin and brandy

With a glass I'm pretty handy

On sour mash and cheap wine

My glass is getting shorter

On whiskey ice and water

So come on have a good time

And get blinded outta your mind

Listen to your Mommy

Listen when your Mommy talks
Original Lyrics:
Come on! Come on!

Love me for the money

Come on! Come on!

Listen to the money talk
Submitted by: Jonathan S.
"TNT"
Better Lyrics:
First you're a Dammit,
and then you're a baa,
Sort of looks like you
don't know who you are.
Original Lyrics:
So lock up your daughter,
lock up your wife,
Lock up the back door
and run for your life.
Submitted by: Dylan Baranski
There are additional parody fragments available.

"Ay-see Dee-sy
Not "Ack Dick" as a friend of mine called it.
Submitted by: Fred

A CCD Submitted by: Calop
This name doesn't give you much to work with.

"Dirty Deeds Done Dirt Cheap (Album)"
"Dirty Deeds..." was originally released in 1976, exclusively in Australia. This album was not released internationally until 1981, because in the words of one of the band members: "Somebody thought we were promoting the wrong things". "The wrong things" in this case being murder, underage sex and that sort of thing.
Submitted by: GlamRockNinjaLord
"Let Me Put Love Into You"
This song and the group's name made it half way to the top of the PMRC's notorious Filthy Fifteen list because it alledgedly had sexual content in it. The PMRC also assumed that the initials AC/DC stood for Anti-Christ/Devil's Children.

Daisy/Easy originally "AC/DC"
Submitted by: Not This One, Jacques

"Big Balls"
They take the music more seriously than the lyrics.
Submitted by: Alyssa

"Driving Cats Bonkers!"
A university (maybe in London) has conducted research on cats by playing various types of music and then certain songs to see how they react emotionally, sleep wise, etc. They've discovered that there's ONE song that gets cats agitated, unable to sleep, feeling disturbed, on guard and incapable of relaxing. That song is the 1990 hit "Thunderstruck" by AC/DC.
Submitted by: Krazee Khat
"Appearance in a Walmart commercial"
Around Black Friday, "Back in Black" appeared in commercials for Walmart.
Submitted by: JeReMy
"Phone Number Lawsuit"
36-24-36 is a woman's measurements. Some couple sued the band claiming that this number is their phone number. The lawsuit was filed when the AC/DC album "Dirty Deeds Done Dirt Cheap" was released in the U.S.A. in 1981. The bogus lawsuit was thrown out. A real situation occured the following year when Tommy Tutone scored a big hit with "867-5309 Jenny".
Submitted by: I Do Dirty Deeds
"A song that can be used about a hit TV show"
The chorus of the song "Big Balls" can be used for a compilation of falls off the Big Balls on the hit ABC show, "Wipeout".
Submitted by: JeReMy

Back in Black (Deluxe Digipak)

For Those About to Rock We Salute You (Dlx) Let There Be Rock (Dlx)