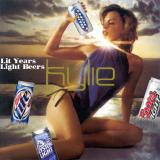 Gummy Mink On My Leg Submitted by: Meredith Corpening

Miley Kinogue originally "Kylie Minogue"
And you thought Cyrus was the only one.
Submitted by: Papa Roach Clip

"Breast Cancer"
Her battle against cancer postponed the completion of "The Showgirls Tour" by over a year.
Submitted by: Rocky Mak

"trademark battle"
there's a lot of media coverage of her battling trademark over her first name with Kylie Jenner, which is properly made up(the battle) as there are many with the name Kylie beside Minogue and Jenner(including 1 who was in Neighbors before Minogue)...
Submitted by: mads
"Boyfriends + Girlfriends(???)"
Since Kylie first appeared as pop singer in 1987 she has had a list of boyfriends that includes actors, singers, and models. Jason Donovan was first from 1984-1988. Kylie met him on the Aussie TV show "Neighbors" and Donovan was also a singer. Reportedly, she lost her viginity to him. Next came Michael Hutchence, lead singer for INXS from 1989-91. Hutchence turned her into "Sex Kylie" but later killed himself in a hotel room. Kylie briefly had a fling with singer Lenny Kravitz in 1991 and much later a dating relationship with James Gooding from 1998-2001. A brief fling with Jay Kay of Jamiroquai in 2003 and then on to French actor Olivier Martinez from 2003-2007 who supposedly cheated on her while she had breast cancer. She has been with Spanish male model Andres Velenoso Segura from 2008-present. Despite several marriage attempts, Kylie has stated in the early 2010s that she probably "will never marry and is content to be Auntie Kylie". She briefly entertained the thought of having a lesbian partner, but still prefers men. Rumors of sexual relationships with her sister Dannii and one of the Spice Girls have never been proven but were based on a pose in bed with her sister in Esquire Magazine and a TV bet where Kylie kissed Geri on-screen while arm wrestling.
Submitted by: Robert D. Arndt Jr.
"Meets Queen Elizabeth II at Charity Event"
Britain's Queen Elizabeth II geeted Australian singer Kylie Minogue after the Royal Variety Performance in the Royal Abert Hall in London recently. The annual event features pop stars in concert; proceeds go to charity.
Submitted by: Robert D. Arndt Jr.
"Appearing on Doctor Who"
She played a character named Astrid Peth, a one-off companion of the Doctor in "Voyage of the Damned" (2007).
Submitted by: Robert D. Arndt Jr. I Believe in You (Enhanced)