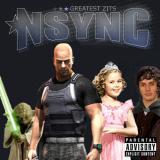 There are additional 'N Sync Combined Groups that haven't been done yet available.

"Tearing Up My Heart"
Better Lyrics:
Just you know the name of the song by U2 is called

"With Or Without You"
Original Lyrics:
And no matter what I do I feel the pain

With or without you
Submitted by: Mickey D.
"Tearin' Up My Heart"
Better Lyrics:
I ripped a juicy fart right next to you
I did it in your car this morning too
Original Lyrics:
It's tearin' up my heart when I'm with you
When we are apart I feel it too
Submitted by: Mrs.Durst
"The Girl Who Has Everything"
Better Lyrics:
For the girl who eats everything
I give you fudge
Cookies and stuff
Original Lyrics:
For the girl who has everything
I give you love
I give you love
Submitted by: Kryptonite
There are additional parody fragments available.

Gurus or yoga teachers
'Cause the mind has to be N*SYNC
Submitted by: Felicia

For the Girl Who Has Everything

U Drive Me Crazy