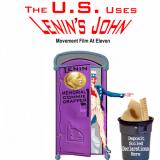 * Happy birthday, John! 71 years ago today. *
Original Lyrics:
Ah! Bowakawa, pousse, pousse
Submitted by: Teenage Mutant Ninja Turtle
"Instant Karma"
Better Lyrics:
Instant grits are gonna get you
So you better stuff your face
Topped with lots of pats of butter
Looks like yellow paste
Original Lyrics:
Instant Karma's gonna get you
Gonna look you right in the face
You better get yourself together darlin'
Join the human race
Submitted by: cereal
"Woman Is The Nigger Of The World"
Better Lyrics:
Woman is the beggar of the world
Original Lyrics:
Woman is the nigger of the world
Submitted by: Mike Hack

"Imagine"
Banned by the BBC during the Gulf War, a year before it was banned in the US following 9/11
Submitted by: Evan
"Working Class Hero"
Banned because of lyric that society typeclasses children until they are
"So f***in' crazy that you can't even see".
Submitted by: DENNIS REMME
"Imagine"
Amazing this is not in the list. From Wikipedia, that font of all human knowledge (citation needed): Although its been said that Imagine "carried us through extreme grief, from the shock of Lennon's own death in 1980 to the unspeakable horror of September 11th," Clear Channel Communications included the song on its post-9/11 "do not play" list following the attacks.
Submitted by: James K
"Woman Is The N***** Of The World"
In mid-April 1972, this John Lennon song is banned by radio stations across the U.S. The song still manages to reach #57 on Billboard Magazine's HOT 100 charts.
Submitted by: Peter

"Imigration violations"
When imigration officials in New York discovered that John Lennon had a pot conviction they decided to try and deport him. But John fought back saying that the move was because of his political views not because he had a pot conviction.
Submitted by: Celeste
"Posession of Pot"
In July 1968 police raided a flat subleted by Ringo Starr and found minuscule amounts of pot. They managed to convict John of posession.
Submitted by: Celeste

"Imagine"
When you play the line, "Imagine all the people," backwards, it sounds almost like, "The people all worship me."
Submitted by: OTTO

"Almost being deported because of a pot conviction"
John Lennon in his fight for harmony through out the world was almost deported by US officials because it was discovered that he had a pot conviction in England.

The Lennons believed that the pot conviction wasn't the reason for the deportation order but it was John's political views that got him in trouble.
But John had the deportation order over turned.
Submitted by: Celeste
"Being a stay at home dad"
John retired from the music industry shortly after his son Sean was born to take care of him leaving all of the business aspects to Yoko.
A lot of John's friends were stunned and thought that he wasn't happy just being a stay at home dad but John did it because he didn't want Sean to forget him.
Submitted by: Celeste
"Being a Walrus"
"I am the Walrus, Goo goo g'joob!"
Submitted by: jdizzy
"John Lennon Glasses"
His circual glasses referred to as 'John Lennon Glasses'
Submitted by: jdizzy