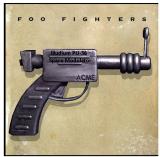 There are additional Foo Fighters Combined Groups that haven't been done yet available.

"Monkey Wrench"
During the rapid fire shout of, 'One last thing before I quit I never wanted any more than I could fit into my head I still remember every single word you said And all the shit that somehow came along with it Still, there's one thing that comforts me Since I was always caged and now I'm free...' that special S-word was unedited for many years on radio (and video) broadcasts and all of a sudden radio HAD to use a short silence to replace the word and yesterday I heard a version with the word 'shit' replaced with 'quit'. 'Quit' is not a noun, folks. DJs are morons.
Submitted by: Phooey On Radio Programmers!
"Learn To Fly"
After the events of September 11 this song was placed on a radio station black list.
Submitted by: Celeste

"Doll" Length: 1:30
First track on the Foo Fighters' biggest hit album "The Colour And The Shape".
Submitted by: G
"Big Me" Length: 2:12
Third song from their self-titled debut album.
Submitted by: John

"Concrete and Gold"
Right at the end of the title track, which closes the CD - there is a few seconds of silence and then Dave Grohl shouts out, 'F*** you, Darrell!'. This seems to be a playful jab at Darrell Thorp, who helped record the album. He said that the Foo Fighters were fun to work with, so that indicates that little outburst is really just a studio joke.
Submitted by: Shout It Out Loud, Brotha!
"Everlong"
In the middle of the song, you can hear the following being whispered: "So Dad would take the Sundays off, and that's the only time he could ever get any rest. And so, because we were loud on Sundays, he'd make us hold his construction boots over our head, till we'd sleep. And they were really heavy boots and I'd used to say "Dad, come on, please," and, like, start crying, 'cause they're too heavy."
Submitted by: Crafthead

"Having a former Nirvana member"
Dave Grohl, former drummer of Nirvana, formed this band after Cobain's death, using material he was reluctant to share (worried about "ruining the chemistry"). Krist Novosellic (also from Nirvana) was considered as a bandmate (Grohl didn't want it to be a solo project), but there was a concern they'd be seen as "a reincarnation of Nirvana." However, despite his efforts, many people do think of Foo Fighters as "the band with a Nirvana member in it."
Submitted by: Ra'akone

"Low DVD EP"
A sticker was added below the usual warning (from the content in the "Low" video that got it banned from MTV) so that it can read "Parental Advisory Warning: Explicit Content ...and also big trucks."
Submitted by: Archie The Colour and the Shape There Is Nothing Left to Lose