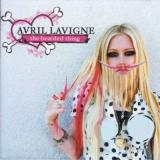 "Who wrote this, your gerbil?" by East Coast Parodies
a parody of "Girlfriend" by Avril Lavigne
The parody is about the song that it spoofs. Written by Ethan Mawyer and performed by Below Average Dave
Soundclick: (Mp3)
(Leave a Comment)

"Girlfriend"
The Rubinoos sued Lavigne for incorporating certain lyrics of their song "I Wanna Be Your Boyfriend" in her song "Girlfriend." The case was eventually settled.
Submitted by: dxman

"Took hiatus from singing due to Lyme disease"
She is fighting Lyme disease, and that has caused a hiatus in her singing career.
Submitted by: Richard Wetfuss