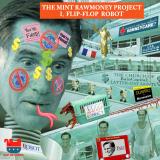 There are additional Alan Parsons Project Combined Groups that haven't been done yet available.

Eye in the Sky The Best of the Alan Parsons Project The Turn of a Friendly Card