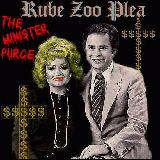 "JINGLE BELLS 1998" by Aaron Inc.
a parody of "Dragula" by Rob Zombie
Jingle Bells like you never heard before
Reverbnation: (Mp3)
(Leave a Comment)

"Dragula"
Better Lyrics:
Crash into ditches
And get thirty stiches
And slam in the back of an
Ambulance
Original Lyrics:
Dig through the ditches
And burn through the witches
And slam in the back of my
Dragula
Submitted by: Jonathan S.
"Dragula"
Better Lyrics:
Yes I am the cook
I work straight from the book I can bake with ease
Cakes really are a breeze
Dig through the drawers and live through the horrors
I'm stuck in the kitchen with my spatulaaa!
Original Lyrics:
Dead I am the cat
feast upon the rat tender is the fur dying as you purr
Dig thru the ditches and burn thru the witches
and slammed in the back of my Dragulaaa!
Submitted by: mana

"Being in a late-1990s video game"
In "Twisted Metal 4", you could play as Rob Zombie. His car was called "Dragula" after one of his songs. Some of his songs, including "Dragula" were in the game, as well as the third game, released before it.
Submitted by: JeReMy American Made Music to Strip By