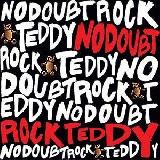 There are additional No Doubt Combined Groups that haven't been done yet available.

"Boxed In A Trap" originally "Trapped In A Box"
Unusual place for a boxing match!
Submitted by: Waldo D. Law

"Pulling Offensive Video"
No Doubt has pulled its new cowboys-and-indians themed music video and is apologizing to Native Americans and others offended by the clip. In a posting on its website the band says the video for "Looking Good" was "never to offend, hurt, or trivialize Native American people." The video features Gwen Stefani and bandmate Tony Kanal in traditional Native American clothes, while Adrian Young and Tom Dumont are in cowboy get-ups with guns. Dumont and Young tie up Stefani while Kanal is behind bars. The band says it consulted Native American friends and experts but realize people have been offended and "sincerely apologize."
Submitted by: Robert D. Arndt Jr.