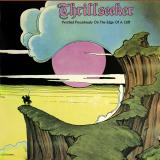 There are additional Hawkwind song titles with a letter changed available.

There are additional Hawkwind Combined Groups that haven't been done yet available.

Wind Hawk Submitted by: R. Jeanine O'Succinate
A wind-up toy in the form of a hawk?

"Urban Guerilla"
This song by Hawkwind was banned in the mid-seventies because of the rash of violence in Ireland. The song speaks of making bombs in your cellar.
Submitted by: Eric Brock
"Urban Guerilla"
B.B.C. banned this song as they thought it would give creedance and approval to the I.R.A.
Submitted by: Royal Pfizbin

"Brainstorm" Length: 11:06
The studio version. Hawkwind usually plays "only" 8 minute version on gigs.
Submitted by: Susanna Viljanen
"You Shouldn't Do That" Length: 21 Minutes
This song is off of the "Master's Of The Universe" album. It is a psychedelic jam. Most of the album is just like that, with the exceptions of two acoustic songs written and performed by Dave Brock
Submitted by: Wade Brock

"Dissentigration" Length: About 10 Seconds
The song says "You Have to Get Into It, If you Want to Get Out of It (3 Times).
Submitted by: Wade Brock

"Hawkwind"
Founding members David Brock and Nik Turner had a court battle over the band's name Hawkwind. Dave Brock stated that he came up with the name deriving it from mythology. Nik Turner stated that it was a nickname given to him because his nose was like that of a beak, and he had tremendous flatulence, causing someone to call him Hawkwind, and he therefore name the band. I go with Dave Brock in every way. He is Hawkwind.
Submitted by: Wade Brock

"Possesion "
It was told to me about a concert played by Hawkwind in the UK in the seventies that because the band being constantly harrased by the police for suspsion of drug possesion, that Nik Turner (saxaphonist) hid a good quantity of Heroin in his saxaphone, and pretended to play throughout the show in order to avoid being busted.
Submitted by: Wade Brock

"Assult & Battery (The Golden Void)"
In the song "Assult & Battery" by Hawkwind the first stanza of lyrics is actually a Longfellow poem. It is a beautiful song.
Submitted by: Wade Brock

"Free/Benefit Concerts in the UK and Europe."
The band Hawkwind has and continues to perform gigs for free, never forgetting their fans and supporters and benefit concerts (recently for the school where his son attended). Their gigs are often a crowd of glassy eyed space cadets, but they are always child friendly and family oriented. They also do a lot of benefits for the good of the planet. Good Job.
Submitted by: Wade Brock

"P.X.R.5"
"On the back side of the album (import copies anyway), there are actually two warning labels. A red sticker the size of a baseball card carries the message that the sticker NOT be removed (and covers most of the artwork). Below that, is the warning "This wiring can seriously damage your health"
Submitted by: princejellyfish Hall of the Mountain Grill In Search of Space