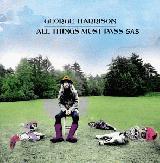 ""Chanting The Name Of The Turd [Tor]" " by Tor Hershman
a parody of ""Awaiting On You All" " by George Harrison
If you open up your heart - blood will gush right out
YouTube: (YouTube Video)
(Leave a Comment)

I really want to snow you

**** With all due respect I don't believe George would've used these lyrics in a song addressed to God. This is a matter of misinterpreting phonetics, that's all : )
Original Lyrics:
I really want to know you

I really want to go with you

"It's Johnny's Birthday" Length: 0:49
A weird song off All Things Must Pass... happy bday, Johnny!
Submitted by: jdizzy

WIL: "What Is Life"
Wil: Popular nickname especially for William.
Submitted by: Peter

"Drug Use"
Was caught in the same drug bust that Donovan, John Lennon, Marianne Faithfull and other British rockers were in.
Submitted by: KL Fan

"A Memorial Tree (Not a Song)"
THIS IS NO JOKE, THIS IS A TRUE STORY, IRONY AND ALL! In California, near a home owned by Sir Paul McCartney where his Beatle buddy George Harrison was allowed to stay at so he could die in peace away from the media and ultra-Beatlemaniacs. After he died a memorial tree was planted in George's honor and a plague corremmerrating him was set underneath. This memorial tree was also a reminder that George loved to do landscape gardening as a hobby. There's going to be a new tree planting ceremony soon because the current tree, which was planted in 2001 is dead due to an attack by * drumroll, please! * - # cymbals clash! # - BEETLES! Ain't that a pity?! My Sweet Lord! ; )
Submitted by: Lung Cancer Sucks, So Cheer Down!

"synthesizer music"
in the late 60s George released "Electronic Sounds", one of the first all-synthesizer albums ever. George would later put his Moog synthesizer to use on subsequent Beatles albums and in his solo career.
Submitted by: Pisces Rocker
"planting the seeds of world rock music"
George got a sitar and learned how to make it talk. The Beatles hit "Norweigian Wood" is one of the first uses of a non-Western instrument in a rock'n'roll song. Other artists have been inspired by this (did somebody mention Peter Gabriel?).
Submitted by: Pisces Rocker
"Being the first former Beatle to have a #1 single"
"My Sweet Lord" hit #1 on Billboard's charts in October, 1970.
Submitted by: beegles

All Things Must Pass [DIGI-PAK EDITION]

Living in the Material World The Best of George Harrison