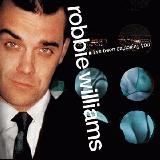 Also known as: Robert Peter Williams. Submitted by: A

A Bimbo Will Rise Submitted by: Josh

"Come Undone"
Not only for sexual contents, nudity and violence, but disgusting insects coming out of actresses
Submitted by: Rocky Mak

"Multiple Addictions, Depression, Alcoholism..."
His list of problems reads like a criminal record. Battle with alcohol, substance abuse and depression had been his problem ever since his days in Take That. He recently was in rehab again for addiction on antidepressant Seroxat.

He is known by his friends to be paranoid, especially for worrying a concert becoming a flop.
Submitted by: Rocky Mak

"Hello Sir"
A hidden track after "Baby Girl Window" on his debut album "Life Thru a Lens", where he tells a poem that takes a dig at one of his former teachers.
Submitted by: Hunter Sullivan
"Dickhead"
From the final track of Rudebox album, Summertime.
Submitted by: Rocky Mak
"Save The Children/I Tried Love"
First one was about the state of society, second one was just talking about a boring girlfriend. here are the answers to some of his questions.
Is the Richard Gere gerbil story true?
False
Did Sooty sleep with Sue?
No
What are the holes in Biros for?
To hold the ball that rolls ink onto the piece of paper
Which one's which in "The Corrs"?
Jim Corr is the guitarist, keyboarder and accordion player
Sharon Corr is the violinist
Andrea Corr is the lead singer and tin whistle player
Caroline Corr is the drummer/percussionist
Did Geoff Hurst really score
With Hawk Eye nowadays, it was determined that he did NOT score that contentious goal. It will stand in record, but it really doesn't... not that it alters the final result.
Submitted by: Rocky Mak
"Stand Your Ground/Stalker's Day Off"
From These Dreams, the final track of "I've Been Expecting You".
Submitted by: Rocky Mak

"The Road to Mandalay"
(Note this only applies to the version which appeares on the album Sing When You're Winning). On this song, everything seems fine. But after the song has "finished", leave the song playing for another 25 minutes and you will hear Robbie say "No, i'm not doing one on this album". This was a reference to people that possibly were expecting a hidden track to fulfill that slot.
Submitted by: Lee

"Being Mistaken For Robin Williams"
When Robin was announced dead, music fans thought it was Robbie.
Submitted by: mads.

I've Been Expecting You

Life Thru a Lens Sing When You're Winning Swing When You're Winning The Ego Has Landed