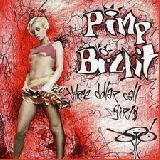 There are additional Limp Bizkit Combined Groups that haven't been done yet available.

"Hot Dog"
Release was restricted due to over 48 uses of the F word.
Submitted by: David

"Intro" Length: 1:18
1st track on "Chocolate Starfish and the Hotdog Flavoured Water".
Submitted by: A Stranger

"Saying the F-word over 100 times in a single song"
The song "Hot Dog", features over 100 uses of the F-word. It has been banned from most radio stations.
Submitted by: GlamRockNinjaLord
"Most hated band in the entire world"
Limp Bizkit really owned the world in 1999-2000, even though they were hated by everyone. The band started having differences with other bands and became enemies with Slipknot, Nine Inch Nails and Taproot. At first they were friends with white rapper Eminem, but they also became an object of his hate. In Chicago, the DJ Manlow hosted a radio show about Limp Bizkit's front man Fred Durst and how much he hated him. When Limp Bizkit played with Metallica on the Summer Sanitarium Tour, in Chicago, the people even threw shoes at them, hitting Fred Durst and causing the band to leave. Wes Borland, Limp Bizkit's ex-guitar, left the band due to serious differences with Fred Durst.
Submitted by: hypersk