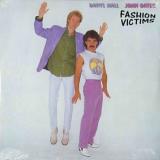 There are additional Hall & Oates Combined Groups that haven't been done yet available.

"Haulin' Oats
(I don't know where to submit this!) It was years before I discovered that it was Hall & Oates and not Haulin' Oats!
Submitted by: Carolyn

Ale & A Sloth Submitted by: Courtney (about as bad as tennis elbow)

AT: "At Tension"
Submitted by: MOR

Do It for Love

Our Kind Of Soul