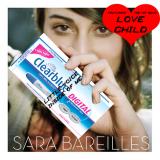 "Chick Flick" by AmIRight All Stars
a parody of "Love Song" by Sara Bareilles
Guys, Tired of watching those terrible, awful, boring as all Hell movies that your girlfriend turns on because she wants you to be more emotional with her? Well, You're not alone. (Written by Matthias, Performed by Abbott Skelding)
soundclick.com: (mp3)
(Leave a Comment)

"vegas"
Better Lyrics:
want some jelly next stop the bakery
Original Lyrics:
down on my knees next stop vegas please
Submitted by: white trash

"Sarah ba-RELL-iss
I've heard some people say "ba-RAY", which would be French, but that's not how Sara herself says it.
Submitted by: Jeffrey

"Kaleidoscope Heart" Length: 1:02
The opening track from her album of the same name.
Submitted by: Yvette Bristle