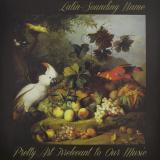 "Whaling Stories" Length: 7:06
This song perfectly orchestrated with Trower's guitar later was orchestrated with the Edmonton Symphony Orchestra a year later.
Submitted by: Paul Warren
"In Held 'Twas In I" Length: 17:39
This is actually the first epic-song. It's divided into five songs, 'Glimpses of Nirvana', 'Teatime at the Circus', 'Autumn of my Madness', 'Look to your Soul', and 'Grand Finale'. It also appears on the 'Live in Concert with the Edmonton Symphony Orchestra' album which is 2 minutes longer than the original.
Submitted by: Paul Warren

"A Whiter Shade Of Pale"
The band's former organist Matthew Fisher filed suit in 2005 claiming that he co-wrote the song. In December of the following year, he won the suit but only received 40% of the composer's share of the copywright instead of the 50% he was seeking. A later ruling denied Fisher royalties saying he had taken too long to file his suit. (Note: I can see why he'd want to receive credit for this song. It's just beautiful.)
Submitted by: Brian Kelly

"Fresh Fruit"
For an band with an interesting name and not using titles for some of their songs, these guys intend to make a novelty song. Fruit is good for doggies too.
Submitted by: Paul Warren

"Autumn Of My Madness"
Between 8:24-8:27 of the epic "In Held 'Twas In I: Autumn of my Madness" you will hear some backwards nonsense and when you play it backwards, you will hear the ending of their song "Homburg".
Submitted by: Paul Warren

Classic Tracks and Rarities: An Anthology