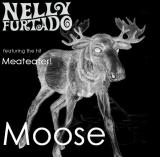 "Promiscuous Squirrel" by Wrekoj
a parody of "Promiscuous " by Nelly Furtado
About a man trying to seduce a squirrel who is just not having it.
www.myspace.com: (mp3)
(Leave a Comment)

"Say It Right"
Better Lyrics:
From my bowel
I could give you
Something
That I made

(U can really hear "bowel"!)
Original Lyrics:
From my hands I could give you
Something that I made
From my mouth I could sing you another
brick that I laid
From my body I could show you a place God knows

"Nell-ee Fur-TODD-o
The last name is of Portuguese origin.
Submitted by: Megan

SIR: "Say It Right"
and you too, MAAM!
Submitted by: Greg

"Do It"
Timberland, who helped produced the single, was sued by a Finnish Musican after the song sounds familiar to his song, Acidjazzed Evening. Janne Suni sued Timberland for plagiarism since he never gave the all clear to simple his work, with the exception of Glenn Rune Gallefoss's arrangement for the song that was never released commercially. Gallefosse was allowed to do so after speaking with Suni on which Timberland didn't do.
Submitted by: Margaret