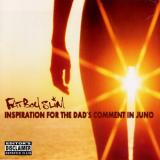 Also known as: Quentin Cook. Submitted by: AKA

There are additional Fatboy Slim Combined Groups that haven't been done yet available.

"Song For Shelter" Length: 11:26
A very long house workout with at least 4 minutes of the song a repeating deep synth and nothing else.
Submitted by: Rory

"Gangster Trippin'"
The background voices that play a few times at the start of the song actually "we're gonna kick that gangster s**t"
Submitted by: Lee

"Halfway Between The Gutter And The Stars (Clean)"
On the bottom right corner of the cover, it says "Kiddies Clean Version"
Submitted by: All-Starr Halfway Between the Gutter and the Stars On the Floor at the Boutique