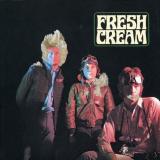 There are additional Cream song titles with a letter removed available.

There are additional Cream song titles with a letter added available.

There are additional Cream song titles with a letter changed available.

There are additional Cream Combined Groups that haven't been done yet available.

"Mother's Lament"
The blues psychedelia of Cream, led by Eric Clapton's majestic guitar work, was briefly interrupted by this music-ditty....the last track on the classic album Disreali Gears. "A mother was washing her baby one night, The youngest of ten and a delicate mite. The mother was poor and the baby was thin, 'Twas naught but an skelingtin covered with skin. The mother turned 'round for a soap off the rack. She was only a moment but when she turned back Her baby had gone, and in anguish she cried, "Oh, where 'as my baby gone?" The angels replied: Oh, your baby has gone down the plug 'ole. Oh, your baby has gone down the plug. The poor little thing was so skinny and thin, He should 'ave been washed in a jug, in a jug. Your baby is perfectly happy; He won't need a bath anymore. He's a-muckin' about with the angels above, Not lost but gone before. "
Submitted by: Agrimorfee

The Very Best of Cream