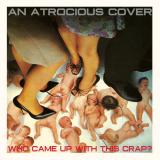 "(Releasing) Flatulation" by Professor Incubus
a parody of "(Keep Feeling) Fascination" by The Human League
After a long hiatus from recording parodies, I finally got around to recording this one! This is one of those parodies that kinda writes themselves after hearing the original version.
http://stream.uhtc.net: (mp3)
(Leave a Comment)

There are additional Human League Combined Groups that haven't been done yet available.

"Being Boil Ed" originally "Being Boiled"
Submitted by: George Straitjacket

"Won't You Daunt Me" originally "Don't You Want Me"
Submitted by: Yvonne Sindri

"Don't You Want Me"
Ron Wood of the Rolling Stones had an affair with Russian art student Ekaterina Ivanova. He left his wife of 20+ years for her. She was moonlighting as a waitress in a cocktail bar when he met her. However, his crazy antics due to alcoholism and possibly cocaine use scared her away. Note, I said SHE WAS WORKING AS A WAITRESS IN A COCKTAIL BAR - isn't that scenario right out of a Human League classic hit? It's so TRUE TO LIFE, isn't it - and I just mentioned a Roxy Music song here as well! ; )
Submitted by: Human Race Big Time Leaguer Best of the Human League