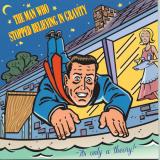 Kel Mitchell And Less Than Jake