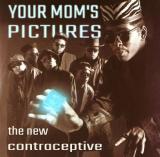 No Nose Job: The Legend of Digital Underground Playwutchyalike: The Best of Digital Underground Sons of the P This Is an EP Release