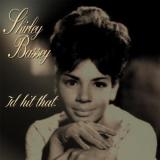 "Bring Speed" originally "Big Spender"
…or some legs are gonna get broken.
Submitted by: Amanda Themeology: The Best of John Barry