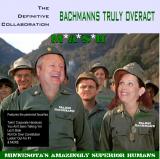 "You Ain't Screamed "Nelson" Yet!" by Rick Cormier
a parody of "You Ain't Seen Nothin' Yet" by Bachman Turner Overdrive
This is a parody about a poor shmuck with a nervous stutter, whose girlfriend keeps yelling out different names during sex but, none of them are his. I submitted the parody to Amiright five years ago but, just got around to recording it.
SoundClick.Com: (Mp3)
(Leave a Comment)
"Fakin' Hair Wig Bizness" by Jim Rotondo
a parody of "Takin' Care of Business" by Bachman Turner Overdrive
HandFart enhanced tribute to all Numb Skulls.
YouTube: (Video)
(Leave a Comment)

There are additional Bachman Turner Overdrive Combined Groups that haven't been done yet available.

Rather Brave Conniver, Mud Submitted by: dxman
So mud is keeping BTO out of the RRHOF?