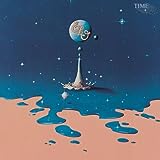 Time album at Amazon.com
Electric Light Orchestra's, "Brontosaurus"
The dated Lyrics:
Now her daddy's getting old
And he seemed to lose control
When the Brontosaurus
Stormed into the house to trap her.
Why They're dated:
When certain dinosaur fossils were found, they were originally given the name "Brontosaurus". But eventually they proved to be of the same dinosaur whose fossils were earlier discovered and earlier named "Apatosaurus". When a name is so given and later found to apply to the same genus earlier named something else, the earlier assigned name has priority under the rules of nomenclature. So Apatosaurus, and not Brontosaurus became the correct name for the dinosaur genus that had been given both names. So "Brontosaurus" is now an outdated dinosaur name.
Submitted by: Kirsten Abercrombie