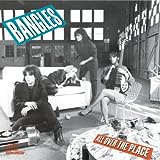 All Over the Place album at Amazon.com
Bangles', "Going Down To Liverpool"
The Lyrics:
I'm going down to Liverpool to do nothing I'm going down to Liverpool to do nothing I'm going down to Liverpool to do nothing All the days of my life All the days of my life
Why:
"Going Down To Liverpool" was the song that started the Bangles on their road to success. Released on an early lp of the group's, back in 1984, it didn't reach into the pop charts but was a minor hit on alternative radio charts of the time. And the video was played a few times on MTV. The video featured the Bangles being chauffeured (the chauffeur was at times annoyed by the group's antics in the back of his car) by none other than Leonard Nimoy (Mr. Spock from "Star Trek"). The video was Leonard Nimoy's son, Adam's first adventure into directing, and one or more of the Bangles were best friend's of Adam's (may have been dating), and Leonard became a family friend to the Bangles and agreed to the role in the video. It would be re-recorded by the group, Katrina & The Waves ("Walking On Sunshine"), the following year of 1985, and that group would take the song into the top ten in Britain (although it would again fail to chart in the U.S.). The place that is mentioned (both in the chorus and the title of the song) is Liverpool, a mainly working class city in northern England. Liverpool is also where the group the Beatles were from.
Submitted by: Peter
Bangles', "Walk Like An Egyptian"
The Lyrics:
All the Japanese with their yen The party boys call the Kremlin And the Chinese know (oh whey oh) They walk the line like Egyptian
Why:
"Walk Like An Egyptian" was the first #1 tune for the California four woman band known as the Bangles, and became one of the best known party/dance tunes of the New Wave 1980's (1986). In the eighth and next to the last verse as I have posted above are shoutouts to Japan (through Japanese), China (through Chinese) and Egypt (through Egyptian) and the Kremlin a real life fortress part of the city of Moscow in Russia that was the home of the KGB spy agency during the cold war and time that the Soviet Union was still in existence as it was when this song was written and was a #1 hit.
Submitted by: Peter