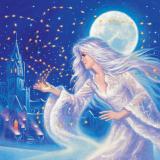 There are additional Trans-Siberian Orchestra Combined Groups that haven't been done yet available.

Fur coats or heavy jackets
Because Siberia is so cold all year 'round.
Submitted by: Santa's Helper