This section is for lyrics that scared or shocked you the first time you heard them. A good example would be in Eminem's "Marshall Mathers", the line "You might see me walkin a dead rottweiler dog with its head chopped off..." Please list the scary/shocking lyrics and a brief description as to why you found them so. NO ENTRIES OF AN OVERT SEXUAL NATURE OR THAT USE HARSH PROFANITY WILL BE ACCEPTED!!! 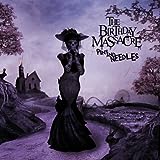 Pins & Needles (Jewl) album at Amazon.com
The Birthday Massacre's, "Happy Birthday"
The Lyrics:
I think my friend said "I hear footsteps"
I wore my black and white dress to the birthday massacre, birthday massacre, birthday
I wore my black and white dress
I think my friend said "Stick it in the back of her head"
I think my friend said "Two of them are sisters"
"I'm a murder tramp, murder tramp" I think I said
"I'm gonna bash them in, bash them in" I think he said
Then we wished them all a happy birthday
We kissed them all goodnight
Now he chases me to my room, chases me to my room, chases me
In my black and red dress
I think my friend said "Don't forget the video"
I think my friend said "Don't forget to smile"
"You're a murder tramp, murder tramp" I think he said
"You're a murder boy, birthday boy" I think I said
Why:
The song starts off with what seems to be three people (which for some reason I'm assuming are probably teenagers?) hiding, and then mentioning the colour of the dress the narrator's dress is, twice. Then it changes to one of the narrator's friends sticking something in the back of a female's head (probably a knife) and then someone mentioning that two of the murder victims were sisters. After that the friends wish them happy birthday and goodnight, and then the narrator is chased to her room by a boy (and it mentions that her dress is now blood-stained), and her other friend saying to not forget the video (which isn't explained what it is, but maybe they're going to film whatever is going to happen?) and one of the friends telling the narrator or the boy to smile, and then (presumably after they reach the narrator's room) they're taunting each other. For some reason, the song makes me think the narrator was probably raped (obviously not killed), because she isn't completely sure what everyone said because her brain might of tried to make her forget what happened, but didn't completely succeed in it? Even if it didn't result in the narrator getting raped by the birthday boy, it's still pretty creepy. Maybe the narrator is recalling a nightmare she had?
Submitted by: Remixphoenix