These are lyrics by Simon & Garfunkel that we think are kind of inappropriate. 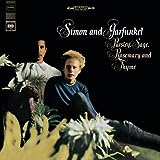