These are lyrics by The New Christy Minstrels that we think are kind of inappropriate. 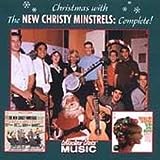 Christmas With the New Christy Minstrels: Complete album at Amazon.com
The New Christy Minstrels', "A Company Of Cowards"
The Inappropriate Lyrics:
Remember George at Valley Forge made the British boys behave.
Why They're Inappropriate:
Valley Forge was the site of a training camp, where American Revolutionary War forces under General George Washington trained and weathered the harsh winter of 1777-1778. It was not a battleground. American forces had no encounters with the British forces there. The next battles in which they would engage with British troops occurred after they left Valley Forge in the warmer months of 1778. So it was only then (and not while at Valley Forge) that their opportunities to "make the British boys behave" came.
Submitted by: Penelope Beckinsale