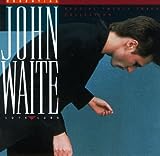 Essential John Waite album at Amazon.com
John Waite's, "Missing You"
The dated Lyrics:
There's a message in the wire, and I'm sending you this signal tonight
And there's a message that I'm sending out, Like a telegraph to your soul
Why They're dated:
Because we use e-mail accounts now!
Submitted by: Juanita