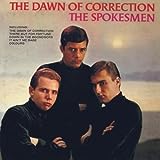 Dawn of Correction album at Amazon.com
The Spokesmen's, "The Dawn Of Correction"
The dated Lyrics:
And maybe you can't vote, boy, but man your battle stations
Or there'll be no need for votin' in future generations.
Why They're dated:
Although this is an answer song to Barry McGuire's "Eve of Destruction," both songs became dated for the same reason - the 26th Amendment lowered the legal voting age to 18 in 1971.
Submitted by: Bob