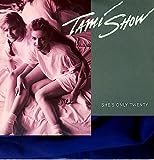 She's Only Twenty album at Amazon.com
Tami Show's, "She's Only 20"
The dated Lyrics:
She's only 20 and it won't take long
She's left her family and she's left her home
Why They're dated:
This song came out in 1988, so she's in her 40s now.
Submitted by: Candy Welty