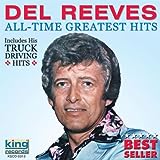 All Time Greatest Hits album at Amazon.com
Del Reeves', "The Girl On The Billboard"
The dated Lyrics:
On Route 66 from the billboard to Chicago
You'll find tiny pieces of my heart scattered every which a way
Why They're dated:
U.S. 66 was probably the most famous highway in the country. It stretched not only from Chicago to St. Louis (as mentioned elsewhere in this song) but on to Los Angeles. It's legendary status may be in large part responsible for this song's very existence. But now U.S. 66 is no more, as interstate highways have taken over the route that it traversed. Now Interstate 55 is the highway traversing the same route between Chicago and St. Louis. Interstate 55 also continues beyond St. Louis, but in a quite different direction than U.S. 66 did en route to Los Angeles. Interstate 55 instead continues south to La Place, Louisiana, en route to New Orleans, where a short portion of Interstate 10 completes the route to New Orleans.
Submitted by: Regina Olsen