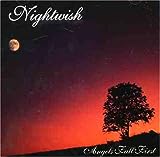 Angels Fall First album at Amazon.com
Nightwish's, "The Poet and the Pendulum"
The dated Lyrics:
Today, in the year of our Lord 2005
Thomas was called from the cares of the world.
Why They're dated:
Because 2005 is called "today" in the lyrics.
Submitted by: Whatnot