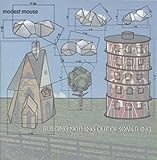 Building Nothing Out Of Something album at Amazon.com
Modest Mouse's, "Summer"
The dated Lyrics:
Wake up, we're stealing cars 1996, 1997, 1998
We're all waiting for the year 2000
Why They're dated:
They're partying and crap like that and apparently waiting for a year that already passed.
Submitted by: sXe LeXi 5X2