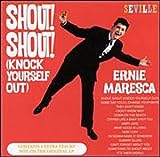 Shout Shout Knock Yourself Out album at Amazon.com
Ernie Maresca's, "Shout! Shout! (Knock Yourself Out)"
The dated Lyrics:
Put another dime in the record machine
Why They're dated:
When was the last time you could play a jukebox for a dime?
Submitted by: crazydon