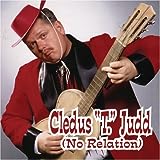 Cledus T Judd (No Relation) album at Amazon.com
Cledus T. Judd's, "1-900 Sheila"
The dated Lyrics:
You can tell all to me
I'm your phone fantasy
1-900-SHEILA
Why They're dated:
1-900 numbers are obsolete.
Submitted by: Tarzan
Cledus T. Judd's, "If Shania Was Mine"
The dated Lyrics:
Oh, I'd love to seduce her
But she married her producer
Now all I do is pray, pray, pray
She'll get a divorce someday
Why They're dated:
Well, Cledus, you got your wish. Shania Twain and RJ "Mutt" Lange have split up after fourteen years of marriage.
Submitted by: betty kaye