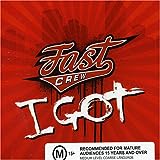 I Got album at Amazon.com
Fast Crew's, "I Got"
The dated Lyrics:
And if you want to hate, well Yippeekaiyay...
Why They're dated:
I say this in 2008, so it's dated on both fronts. The song was released in 2004, so it was almost 10 years since John McClane said that on "Die Hard With A Vengeance", and now it is still dated. "Live Free or Die Hard" was released on 2007, but nobody, even Bruce Willis, even though there would be a Die Hard 4.0.
Submitted by: Rocky Mak