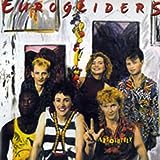 Absolutely album at Amazon.com
Eurogliders', "City of Soul"
The dated Lyrics:
copper understand this is still 1985
Why They're dated:
Ahem! A mere 21 years ago
Submitted by: kylie