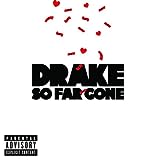 So Far Gone album at Amazon.com
Drake's, "Over"
The dated Lyrics:
Two thumbs up, Ebert and Roeper
Why They're dated:
Roger Ebert, the Ebert of Ebert and Roeper, died on April 4, 2013 and the show At the Movies with Ebert & Roeper, which is being referenced was cancelled on August 14, 2010, just over five months after the release of "Over".
Submitted by: JeReMy