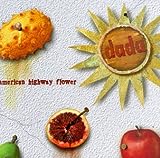 American Highway Flower album at Amazon.com
Dada's, "Dizz Knee Land"
The dated Lyrics:
I just flipped off President George.
Why They're dated:
This may sound timely, but it actually refers to George Bush Sr. (Of course, it will be dated again next January.)
Submitted by: Brian Kelly