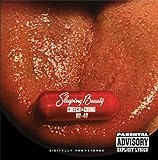 Sleeping Beauty album at Amazon.com
Cheech And Chong's, "Born In East L.A."
The dated Lyrics:
Chong: Alright, then. Who's president?
Cheech: Oh, that's easy. He's that guy from "Death Valley Days". Um, John Wayne?
Why They're dated:
The "guy from 'Death Valley Days'" was actually Ronald Reagan who hasn't been president since 1989.
Submitted by: Brian Kelly