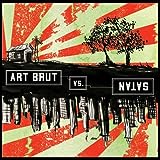 Art Brut Vs Satan album at Amazon.com
Art Brut's, "Formed a Band"
The dated Lyrics:
We're gonna play it for 8 weeks in a row on Top of the Pops!
Why They're dated:
The BBC has since canceled Top of the Pops.
Submitted by: Cat