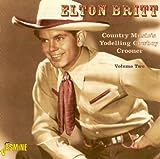 Country Music's Yodelling Cowboy Crooner Volume 2 album at Amazon.com
Elton Britt's, "There's a Star-Spangled Banner Waving Somewhere"
The dated Lyrics:
Let me help to bring the Axis down a peg
Why They're dated:
The Axis was the term for the trio of Germany, Italy, and Japan during World War II. World War II ended in 1945!
Submitted by: skyshine