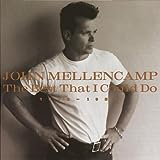 The Best That I Could Do 1978-1988 album at Amazon.com
John Mellencamp's, "Hurts So Good"
The Lyrics:
Come on baby, make it hurt so good
Why:
This would ruin your day if you got a call while getting a flu shot.
Submitted by: Kerry
John Mellencamp's, "Jack & Diane"
The Lyrics:
A little ditty 'bout Jack & Diane
Two American kids growing up in the heart land
Jack, he's gonna be a football star
Diane's debutante, back seat of Jacky's car
Why:
This song wouldn't be the best ringtone choice if your cellphone rang in front of a guy named Jack and a girl named Diane (especially if Jack's a football player).
Submitted by: Kerry