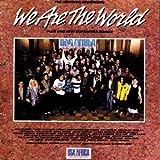 We Are The World: U.S.A For Africa album at Amazon.com
USA For Africa's, "We Are The World"
The Lyrics:
N/A
Why:
USA For Africa was another temporary group who had a major #1 hit in the spring of 1985. USA For Africa was in response to the success of the British temporary group Band-Aid. USA For Africa was gotten together with the help of Quincy Jones after the Grammy awards. And on "We Are The World", that went on to huge success and would spur the original worldwide "Live Aid" concert in July of that year, would appear such artists as Bruce Springsteen, Cyndi Lauper, Michael Jackson, Dionne Warwick, Huey Lewis & The News, etc. The lyrics doesn't contain any references to any real places, including the continent of Africa, but the name of the group and the lp that came out of it, USA For Africa reference the United States Of America (USA), and the continent of Africa.
Submitted by: Peter