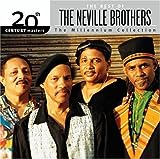 20th Century Masters - Millennium Collection: The Best of the Neville Brothers album at Amazon.com
The Neville Brothers', "Sister Rosa"
The Lyrics:
The people of Montgomery sat down to talk
Why:
This song is about Rosa Parks and the Montgomery bus boycott
Submitted by: Robert Ballinger
The Neville Brothers', "The Ballad of Hollis Brown"
The Lyrics:
There's seven people dead on a South Dakota farm
Why:
Originally sung by Bob Dylan, this song tells about a farmer in South Dakota who kills himself and his family out of desperation during a servere drought.
Submitted by: Robert Ballinger